Out in the orchards pruning is getting under way; picking is still not completely finished - fruit for juice is the last on the agenda!

With the modern; 'later maturing' varieties still full of leaf, pruning is pretty much confined to those with little leaf still on the tree; e.g. Cox, Bramley and Pears.

The drier soil conditions now prevalent have encouraged some growers to 'crack on' with planting new orchards. But; the nurseries have been reluctant to lift trees while leaf is still on the young trees, so many young trees are still in the soil on the nurseries.

During my 55 years in the apple industry, the structure of apple trees has changed dramatically. In the days of my youth many of the trees on our family farm were 'standard trees' with the trunk standing six feet high and the branch structure reaching in excess of 25 feet and planted on a 24 feet square plant!

The modern trees; 'well relatively' so, were only 15 feet high and planted on an 18 foot square plant were Bush trees. The most intensive planting system was a two acre orchard of 'Cordons' planted 2 - 3 feet apart in the row with rows only about 8 - 9 feet apart. The Cordons were only economical to plant as Dad's fruitman 'budded' each rootstock 'in situ' with Cox and a mixture of pollinators.

But that was a 'one off' and had been planted on too strong a rootstock (M2) so once the tree filled its space, containing it without reducing yield was very difficult. In the end, the Cordons grew more wood than fruit!

Over the years our farm developed and trees became smaller and closer together. By the time I sold the farm in 1991, many of the orchards were intensive 'centre leader' trees planted 4 - 6 feet in the row and with rows 12 feet apart. None of the trees required more than a small step ladder.

Cox Orange Pippin - the predominant variety, and one which had served my family well, particularly in the two decades after the second world war, had evolved from a rigid 'spur pruning' system to a a more relaxed mix of 'renewal system' with spurs on the older wood.

During my lifetime in the apple industry, I have seen many proposals for improving productivity by variance of 'tree management' systems; from the standard trees of the late 19th/mid 20th century, via bush trees on M9, the change to centre leader trees; e.g. Spindle Bush trees, multi row bed systems (3, 4 and even 7 row beds) before the industry moved back to intensive single row systems.

For the moment and "I say that cautiously" as nothing ever seems to be permanent, the fruit wall is the current favourite format for most of the new orchards planted over the last few years. 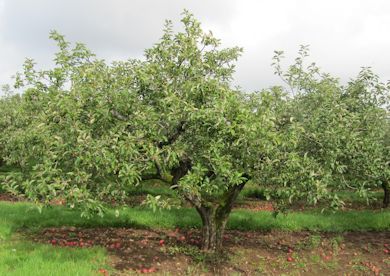 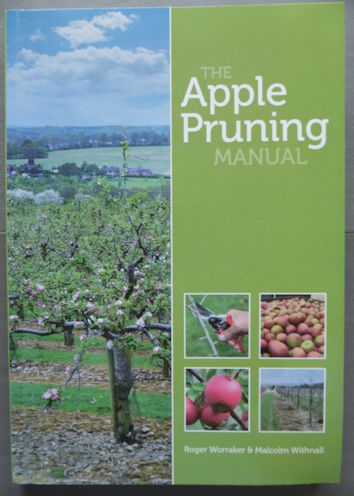 Whatever the system, each variety has its own characteristics and this brings my nicely on to the subject of The APPLE PRUNING Manual written by Roger Worraker and Malcolm Withnall.

"It has been over 50 years since the last commercial pruning book was published, this one is long overdue"

The English Apple Man has been fortunate to have known Roger and Malcolm for very many years and is delighted to welcome this valuable addition to the technical literature available for aspiring growers, established growers and enthusiastic amateur growers. 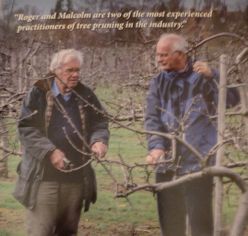 Roger Worraker has a lifetime of advisory work with leading growers in 'Mid & West Kent' and pioneered the development of Bramley production and in more recent times, the 'Best Practice' for Gala apples with his co-author Malcolm.

Malcolm Withnall is able to combine 25 years of commercial fruit production experience with 10 years of teaching RHS courses for amateurs (and professionals) at Hadlow College, and providing practical courses in fruit culture for the amateur gardener.

Both authors are trained instructors at college and commercial level, and have provided fruit tree pruning courses to both novice and experienced growers.

The authors recognise that there are different views held by growers and advisors about pruning systems, but this Apple Pruning manual sets out to identify the individual characteristics of varieties integral to their 'individual' performance.

Reading through this excellent Apple Pruning manual reminded me of so many of the 'basics' learnt over a lifetime in the industry; as a reminder of the basics alone it is more than worth the modest purchase price of £10 (+ £2 post and packaging) and should be on every one of 'my readers' Christmas list!

The authors follow the cycle of tree management systems from the large 'standard' trees of the late 19th century, via the 'bush' trees of the 'pre & post' War (WW2) years onto the 'Spindle Bush' era of the 1960's - 1990's and the evolving narrow highly intensive 'single row' systems of today.

Their understanding of the 'nuances' of varietal characteristics is an important reminder for anyone attempting to plant a single tree in the garden, and equally to the commercial grower planting thousands of trees per hectare.

I like the passage at the bottom of the the first page in Chapter 1; "All to often those who prune are more concerned with containing the trees to a given size and shape, often set out in the initial decisions of the planting distances selected for the system planted. This often overrides the need to maintain the correct balance between new growth and quality flower bud production when balancing soil type, rootstock selected, annual rainfall and nutritional programme adopted with the amount and quality of light falling on and through the trees"

In a 'nutshell' the objectives for the orchard have been lost due to insufficient space allocated to the trees in the planning stage in relation to the characteristics of the variety.

Cox due to its inability to flower (and crop) on one year wood, requires fruiting laterals to be 2 - 4 year old; this requires more space than a Gala tree which flowers and crops on one year old wood (wood that grew in the previous summer) and is much easier to contain within a 'space'

In Chapter 2: a quote from the manual: "Pruning methods should offer a clear understanding and recognition of the fruiting habit of each variety under consideration e.g. spur bearing varieties such as Cox Orange Pippin and Spartan, tip bearing such as Bramley, Worcester Pearmain or Discovery, or spur and tip bearing varieties such as Gala, Braeburn and Golden Delicious.

Also in Chapter 2: "recent new cultivars have exiting potential with their inherent capacity to flower and fruit on maiden wood, and in the case of varieties such as Cameo, produce strong flower potential on the top of short, strong, brindles on one and two year old laterals,

In Chapter 3: a glossary of terms used in pruning trees. A valuable reference for anyone pruning, whether amateur or professional.

Chapter 4: deals with the pruning of young trees at establishment and in the formative years.

The use of Mechanical Pruning is featured and in the final Chapter 15: Roger and Malcolm debate the Amateur fruit gardener v Professional grower - why is the gap so wide?

There is so much fascinating detail in The APPLE PRUNING Manual and it would be easy to write too much; my intention is to look at some of the Varietal characteristics in greater detail in newt week's English Apple Man Journal.

In the meantime, I encourage my readers to download the order form and buy this excellent manual asap!

To buy Roger Worraker & Malcolm Withnall's excellent new book - click on BUY The APPLE PRUNING Manual then 'right click' on image and save to your PC or Print order form.